The Story of the Battle for Hastings Pier – by Jess Steele

It’s an exciting time for seaside towns and for piers.

As we approach the opening of the newly renovated Hastings Pier, it feels important to remember the story of the Battle for Hastings Pier. 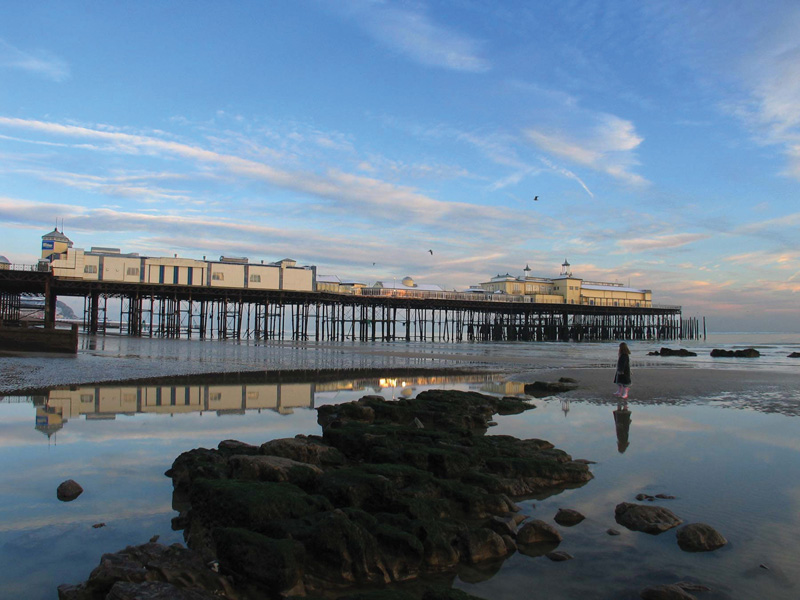 Here is our totem as it was… beautiful, derelict. It closed 10 years ago when it became obvious that the owners (an off-shore company called Ravenclaw, registered in Panama to avoid English company law) were failing to invest the money they were making back underneath. It hadn’t been that great for a while but once it closed we realised how important it was. 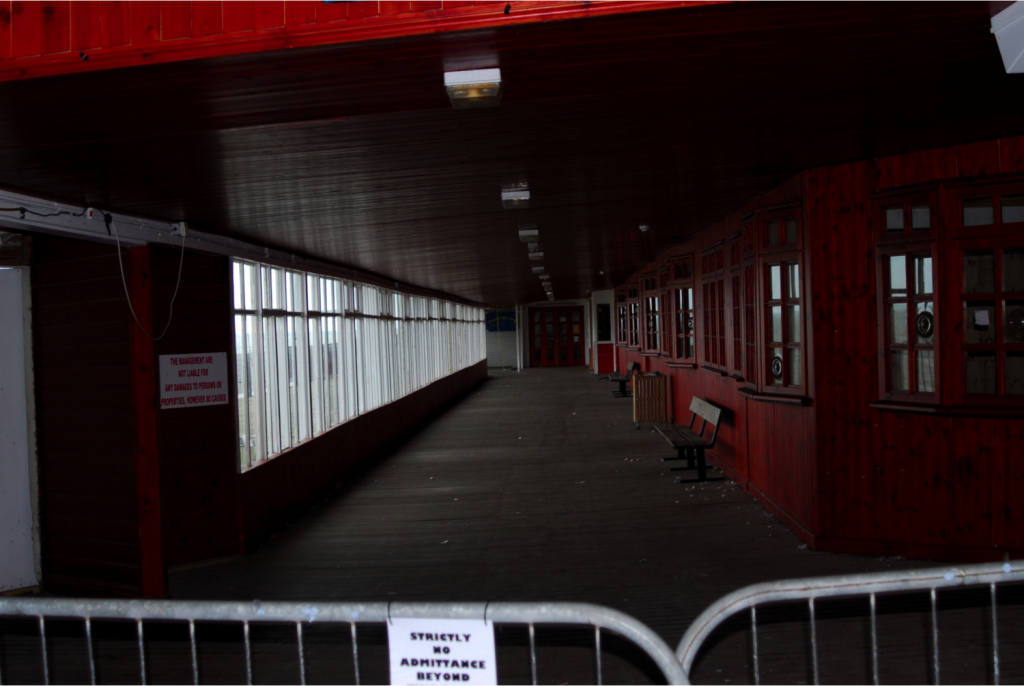 Our greatest fear was that it would end up like Brighton’s West Pier. 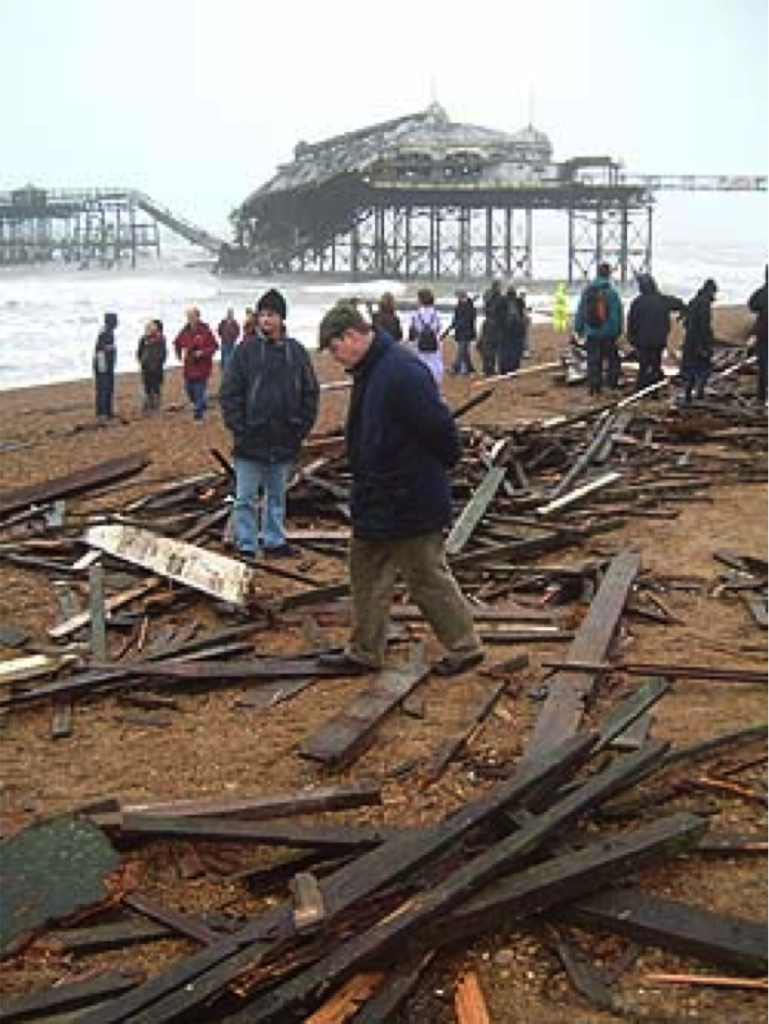 Hastings is a mixed-income town, but still the poorest in the South East. The two wards where the pier is situated are significantly deprived and the impact of the pier closure on local businesses was terrible; there was no longer any footfall. This area, known as White Rock, had been ignored in the council’s strategic planning over many years – they had left it to the whim of the millionaire Ian Stewart and then to Ravenclaw.

In 2006 the council issued an emergency closure for safety reasons. In November, a public meeting was held – 200 local residents met and the Friends of Hastings Pier was formed. We spent a year trying to keep it the pier in the public eye and then when it became obvious no one else was going to save the pier, we formed the Hastings Pier & White Rock Trust to take on the challenge.

It was a complex project; ownership, restoration, a commercial future. Over the course of 2 years we got to grips with it: our case was sound, our approach was innovative and everything we were saying made sense. It fitted with government and council policy but there was a fundamental problem: lack of respect, fear of risk, and waiting for a private sector fairy godmother. 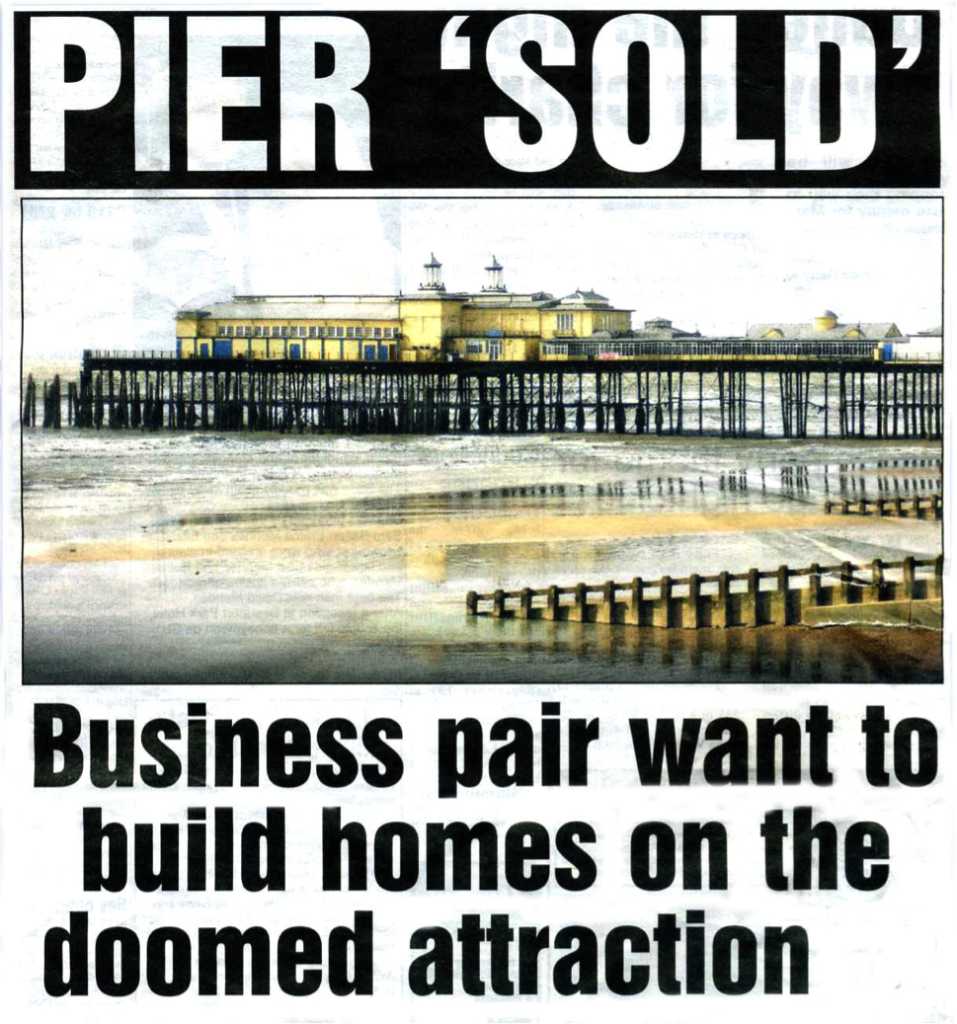 It wasn’t just the confusion caused by a ‘sale to a third party’ that undermined our lottery bid. HLF officers said that the committee spent ages on the discussion and were minded to approve but felt it was too risky. We faced a Catch 22 – we couldn’t get money without owning it and we couldn’t get ownership without money. At a meeting between HBC and HLF I watched the well-paid staff of two large organisations, both supposedly acting in the public interest, recognise the problem but absolutely refuse to budge. I pointed out that while they stood firm, all the impact landed on the economy and community of Hastings and that rather than sharing that risk they were asking us, a tiny group of volunteers, to take it all onto our own shoulders. What was needed was to take small but definite steps forward on a twin track of ownership and funding, hoping they would one day come together.

We needed the Council to take the first step towards Compulsory Purchase (CPO) – an Approval in Principle. Meanwhile, we would move forward with funding. It felt like we had the right arguments but no one was listening, again!

It was time to put some pressure on; we made a conscious decision to ‘up the ante’ and started a campaign to be known as The Battle for Hastings Pier.

As if by magic, we came across a small fund to support community groups in campaigning. They agreed a grant of £4,000 just in time for our march on 17th October 2009. We used it for posters, flags, hi-vis jackets, collection boxes, and a very expensive copy of the complete CPO Handbook which we tied up with ribbons and presented to the council at the end of the march! 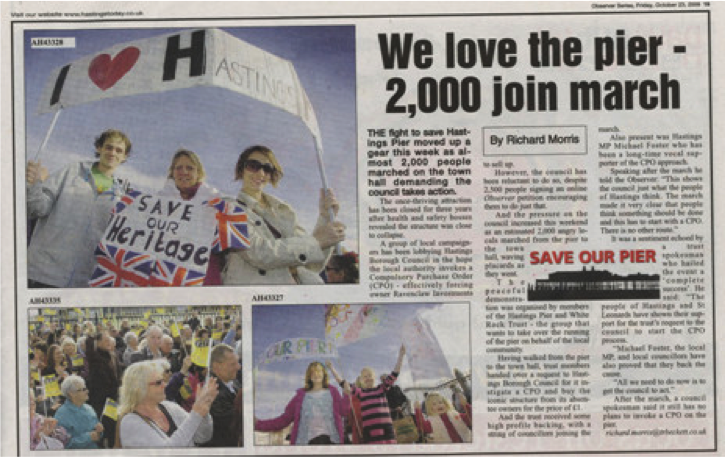 Amazingly, the grant was withdrawn a few days later, not really to do with us but because No 10 had found out just how ‘unpopular’ most of the campaign causes being supported were (a diverse range of projects on topics such as LGBT awareness, asylum seekers and travelling communities) and pulled the fund. This actually gave us a real boost! We got onto Twitter to make a fuss and began to feel the buzz of social media campaigning. We already had 500 fully-paid up members and had built up over 4,000 people in the Battle for Hastings Pier Facebook group. But we were about to find out just how important numbers can be…

They still weren’t listening and things were getting desperate for the pier.

It was time to do Politics.

Just before the pier had closed back in 2006, a surprise election result had kicked out the Labour administration and put in place some classic provincial Tories who had never expected to win and were bewildered by it. By the autumn of 2009 the council was very nearly hung – with 15 Labour, 3 Lib Dem, 16 Tories and 1 independent. By chance, one of the Tory councillors died and a by-election was called. It was actually in a safe Tory seat not particularly close to the pier, but too good a chance to miss.

We considered putting up a candidate, but instead we crafted a campaign around ‘Vote Pier’ asking candidates what they were going to do about the pier. It was crucial to get across that the future of the pier was a political decision.

Volunteers and their families distributed leaflets and postcards to 2000 households twice. Around this time, we began to get support from the Re:generate Trust. Their approach of genuine, systematic listening changed the way we talked to people when we went round – instead of trying to ‘sell’ the pier message, we asked what they cared about – what they loved about the town, what made them angry, sad, frustrated, what they would like to see. We also put this out as a survey to our members. The results gave us a depth of material that councillors can only dream of.

Just before the by-election we held a Candidates’ Debate at the local primary school. Rather than giving the candidates a platform to give speeches we managed the whole thing to focus on the pier – and establish the Trust’s credibility including shamelessly using my daughter and her mates to explain why Hastings Pier is so strong and why it would cost £4m to demolish – then gave the public a chance to question the candidates on any issues that concerned them. By the time we were done they were leaping up to sign the CPO pledge!

When the vote came in, the Tories had nearly lost the seat and the very next day we were invited to the town hall to discuss with the Leader, Deputy Leader and senior officers from HBC. We presented our Twin Track approach, taking little steps on both the ownership and the funding in parallel, which was helped later that month by being awarded a £75k feasibility grant. 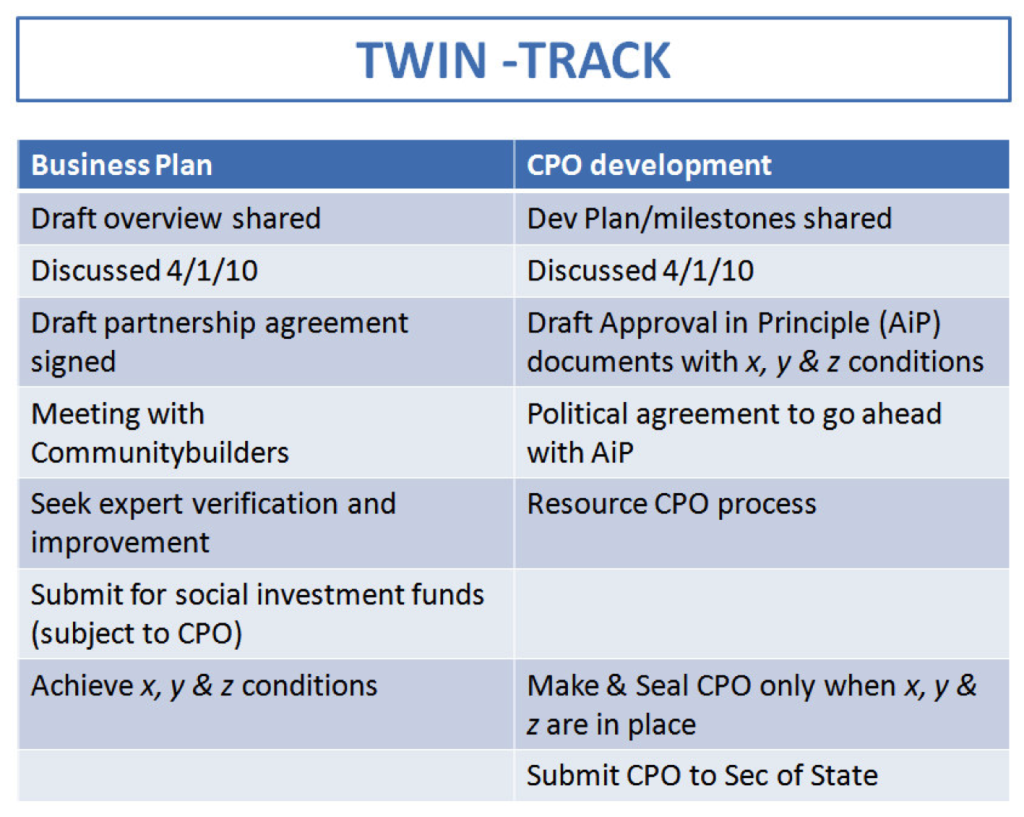 At last it seemed there would be good news. In that year’s May election the Tory council was replaced by Labour (and the sympathetic but tired Labour MP was replaced by a gung-ho young London Tory woman, now Secretary of State for Energy). By July the Cabinet agreed unanimously to progress the CPO and allocate £200k for the costs – suddenly we were in “active partnership” with the council. We began to focus on our membership, the lottery bid and a community share issue. It was all going fantastically well – we even went out to full EU advert for our architects on 4th October 2010. 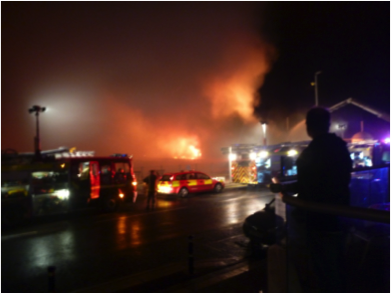 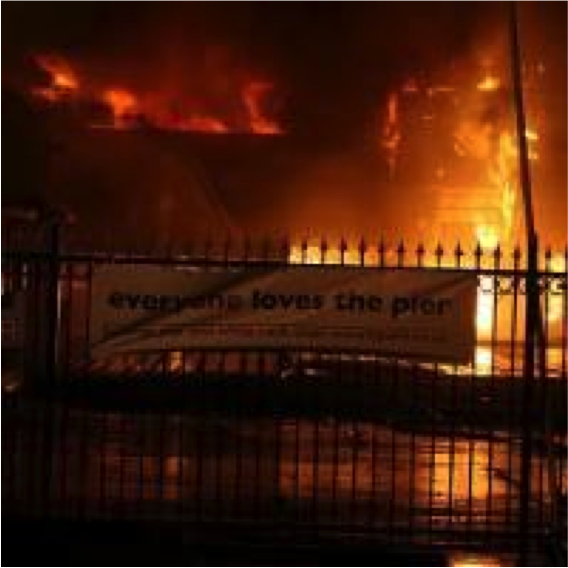 We watched it all night. In daylight it became clear just how much had been lost, but also the miraculous survival of our banners! An omen? 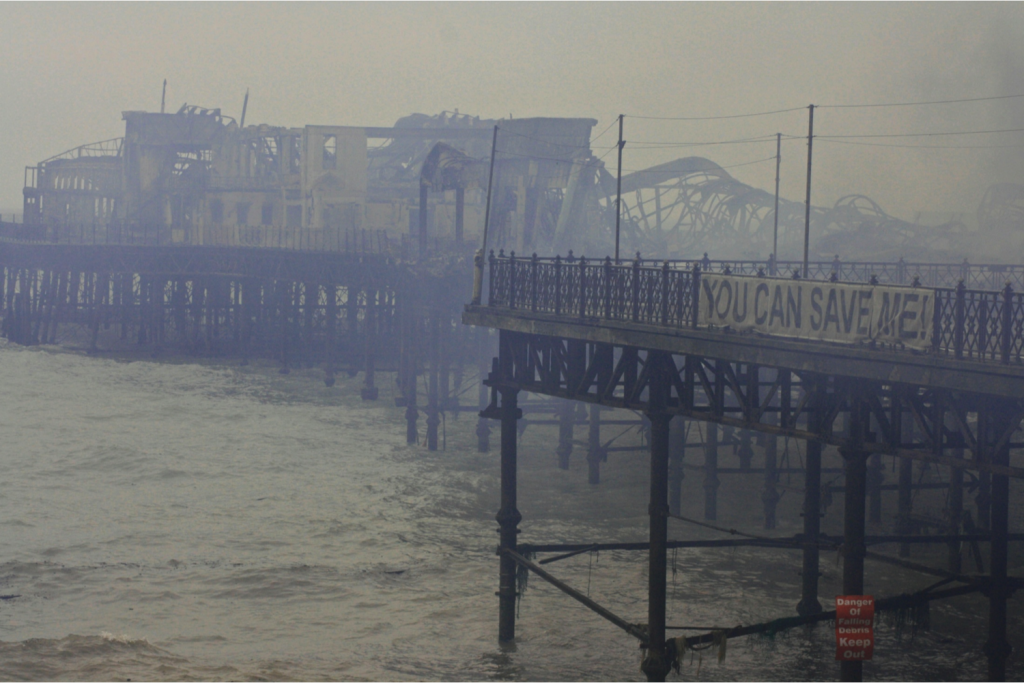 We were forced to revisit our entire strategy. With no buildings left we could no longer rely on a partial restoration and progressive commercialisation. The whole pier would need to be restored with a minimum £8m cost. The annual Major Grants deadline was 7 weeks away. The officers said it was impossible, but we did it anyway. At least by this point everyone was on side. 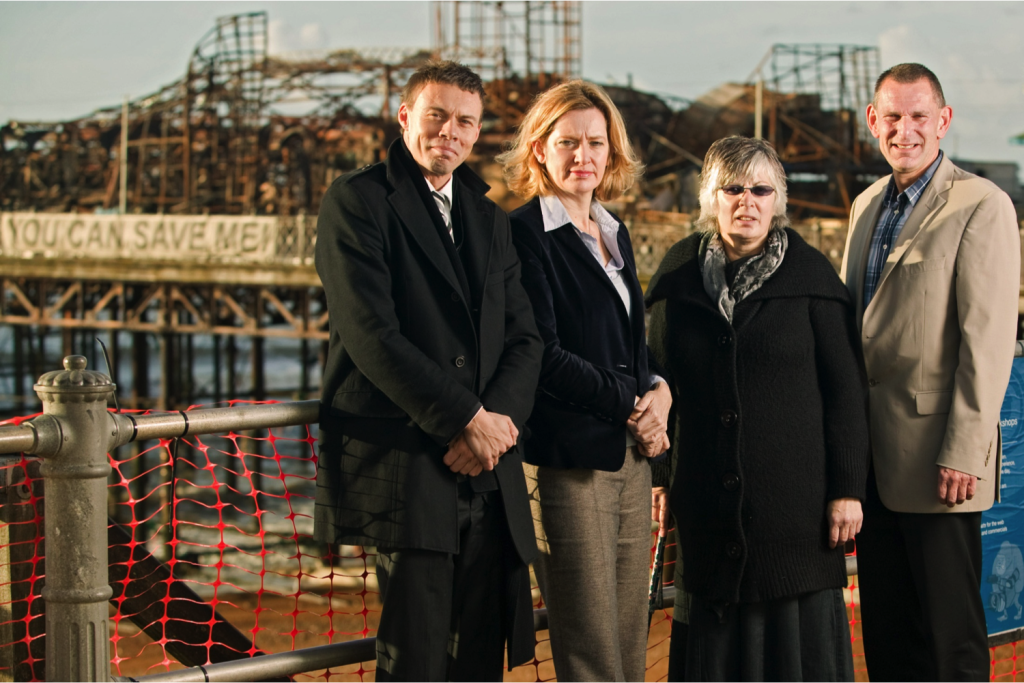 This is what we had left after the council paid to clear most of the debris away.

We rushed out a fundraising postcard and walked the prom for days afterwards comforting people, talking about the future. When the Heritage Lottery Fund came to visit in March 2011, the town was plastered with signs, not least this one that clearly states that the council were working with the trust to find a future. 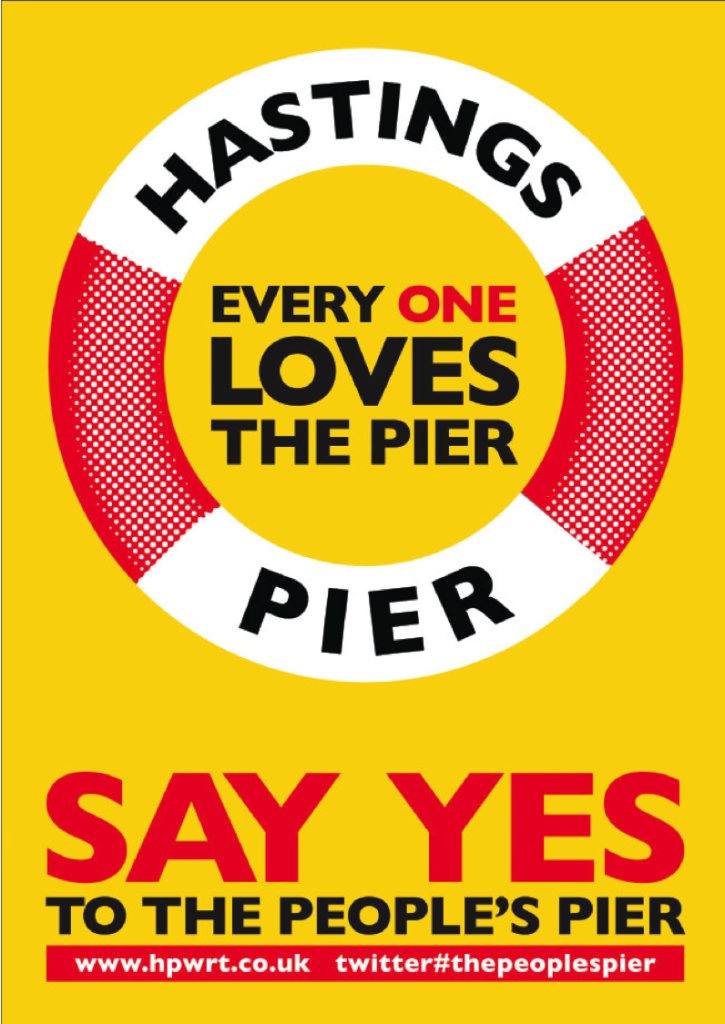 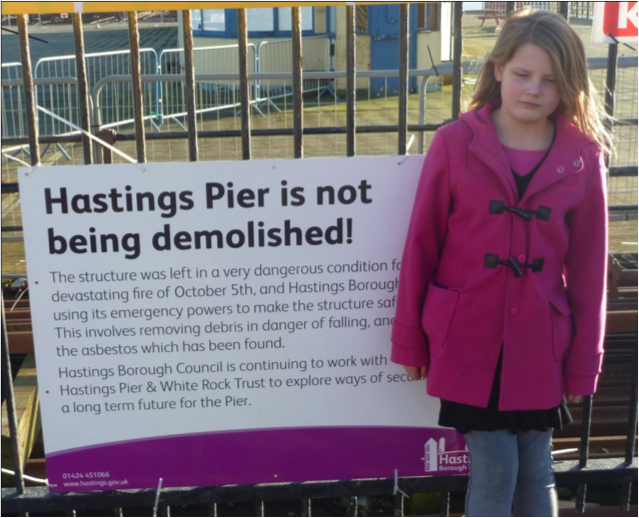 We used Twitter #justsayyes and @thepeoplespier, along with celebrity letters and a massive Party on the Prom just a few days before, to ramp up the pressure.

On 20 April 2011 I called HLF and found out, but because of local elections it was 3 full weeks before we were allowed to tell anyone that the pier had hit the jackpot!

We received £354,000 for the development phase and recruited the best possible chief executive. With a lot of hard work we created the Round 2 bid, including asking for £3m more.

We then waited in limbo Aug-Nov 2012 but were successful in Nov 2012 with an £11.4m pier jackpot! However, we still had to raise the match-funding – and we called in all the support we’d been building for years.

Ownership was transferred in August 2013 to the Hastings Pier Charity and work began on the restoration. Community Shares put the last piece of match funding in place, with over 3,000 people now owning the asset and democratic governance for the charity.

And now… it’s about to open and I’m finding it hard to contain the excitement! This has been a story of dogged persistence. There have been nasty conflicts, bursts of joy, and sustained impatience. On 21st May I’m going to take a very deep breath and let the ‘sublime quality’ of Hastings Pier wash away the stresses. See you there soon! 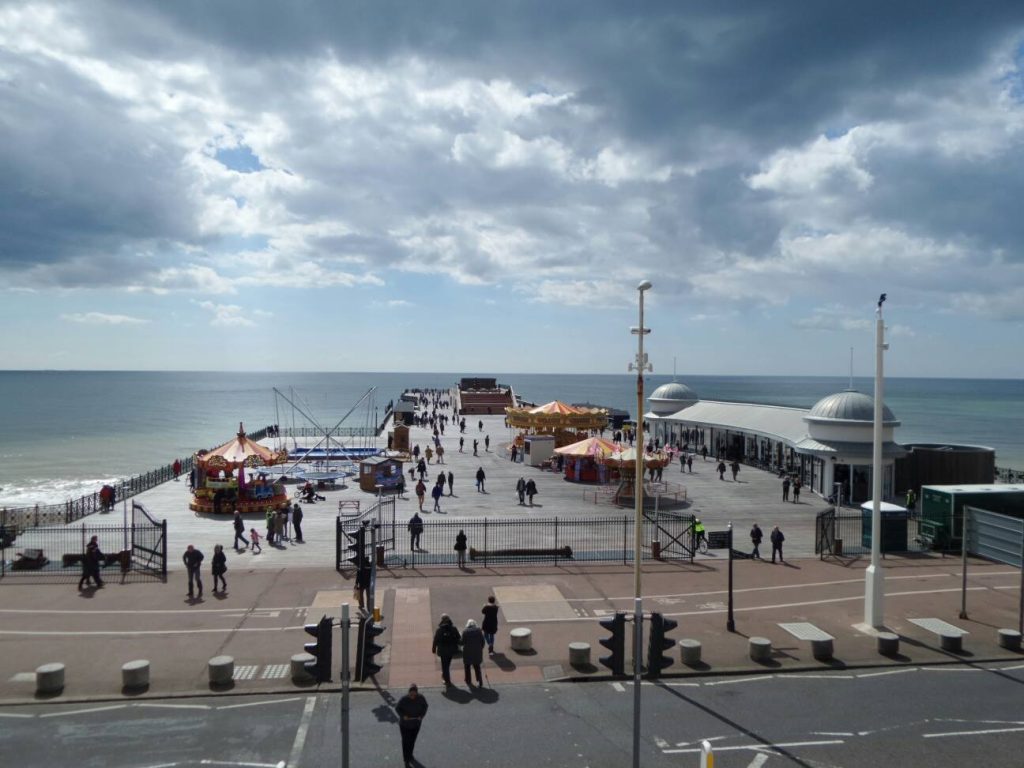